I see a little silhouette of a dog

Okay, so the Idiot in the White House has a new communications director (notice the lower case?) and Sean quit...  Oh me, oh my oh... and he's a little guy (with a Napoleonic Complex no doubt!).  I was reading some of his comments regarding his new position and was stunned to see that he had actually "I love the President."  According to the Washington Post, he also said that he loved Sean Spicer.  Sorry, but that's a little too much phony information.  Scaramucci is a tiny billionaire business man who loves himself.  The truth is that the Idiot in the White House wanted a billionaire attack dog... and this is what he got. 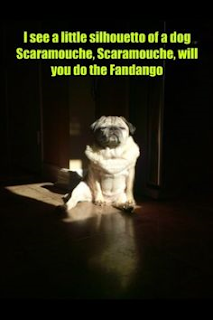 This doesn't mean that Little Tony isn't going to snarl, and growl, and nip at the free press, which is one of the main reasons I suspect the Idiot chose him.  You see, Little Tony attacked CNN and 3 of their reporters quit because they didn't do the ground work on a story about him.  You can bet that's changed, and you can also bet it's not going to be "hands off Little Tony."  In fact there will most likely be more hands on Little Tony then there were Crazy Christian paws on the Idiot last week... or was it the week before.  He does do so many faux publicity stunts it's difficult to keep track of them all.
And I bailed on the White Water Rafting trip that is going to happen this afternoon.  Storms.  I asked my brother if he'd been watching Accuweather and his response was "I'd rather be in denial."  Well, I looked and they should be hitting the Pittsburgh region in about 3 hours... and we're not talking about a 15 - 20 minute storms here, nope, the torrential rains, and thunder, and lightening, and winds, are supposed to continue for hours... and hours.  So, I wouldn't be surprised if they get there and find out they've been cancelled.  I mean, who in their right mind would take people out on rafts, on a river, with lightening exploding across the region?  Of course my brother does have an excuse... he's a Republican.
Posted by Dave R at 8:02 AM