Ringo and other things

While for most of you today is Sunday, for me it's Monday since this is the start of my work week.  Originally it was supposed to be a 7 day stretch but my friend Patty's Mom died last night so I'll be taking off one day to go to the funeral.
Yesterday was my day of rest, well, I did take the weed wacker across the front yard to knock down the weeds that are growing much, much faster than the grass, but that was like... well, maybe 15 minutes of work.  I also made popcorn, one of my favs, in a pan, on the stove.  I haven't done microwave popcorn in years.
There was an interesting article in the LA Times this AM about Ringo Starr. he's 77 years old.  Holy Shit!  I am always astounded to see things like that since age rarely seems to enter into my conscious thought.  No one stops aging.  The days continually add up as the years creep by, and then one morning you wake up and realize you're not as young as you think you are.  And then there are those days when I almost believe my consciousness has been around forever.  Screwy, ain't it?
I've also pissed off some people on Facebook, not with anything I've posted but with a certain restriction I am initiating.  I've been telling people that if they want me to read their comments they need to be 25 words or less.  I don't know why it is, but some people feel that being verbose defines them as being an expert, of course they think they're getting their point across.  They don't like it when I tell them that they need to be more concise, more succinct, that they need to measure what they are saying. 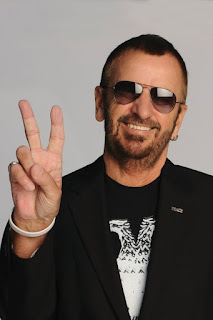 Notice how I didn't say anything about the Idiot in the White House...  mostly because big budget battles are forecast because the "do nothing party" only wants to cut taxes for the rich.  The shit is about to hit the fan.
Posted by Dave R at 9:05 AM