Nature has a way

Good thing I looked at my schedule, for some reason  thought I was in a 7 day stretch... that doesn't happen until next week.  This week my weekend is Thursday and Friday, and while I don't have those 2 days chock full of chores, I suspect I will end up being very busy.  Next weekend I'm supposed to go 'white water rafting' (notice the lack of enthusiasm in my tone) with my brother and some of his children.  His youngest is 22 so it's not like they're little kids.  The problem is that he thought it would be great if we all stayed over night camping out... and I don't camp... at all.  So, I'm not staying overnight.  Neither is my nephew Gordie, who's wife isn't going at all, which means he and I will drive out to Pittsburgh in the AM, do the rafting bit, and then drive back to Harrisburg.  I'm sure he and I will spend many hours deriding his father's politics since Gordie and his wife are maximum progressives.
I can remember, a long time ago mind you, hearing Chris Matthews saying that the Republican Party was on it's way to being a regionalized party which is something I've also been saying for a very, very long time.  And, as always, the Republican Party is harping about Voter Fraud, and they're trying to change the rules, to eliminate certain voters.  Now when pressed, those Republicans pursuing this may, if you're lucky, give one example of one or two voters and that's all.  There really isn't a lot of voter fraud... well, there was that time that peroxide blonde Ann Coulter didn't change her voting address and voted in the wrong precinct.  However, if you look at those states trying to pass voter ID laws it is a regionalized effort. 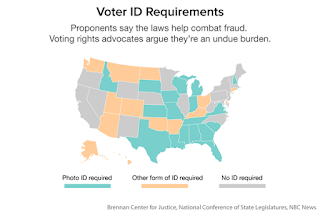 See, they all live in Idiot Land, or at least the vast majority of them are, and these are also states in which the pure white population is on the slow decline.  This is how life evolves.  The dominant gene pool is winning out.  And that's a reality that totally blows their concept of America out of the water, that it's not going to end up white and... Evangelical.  They are trying to build their own wall, but, as Jeff Goldblum said in Jurassic Park "Nature has a way of going around it...." or, it was something like that, and we know Republicans don't understand Nature at all.
Posted by Dave R at 8:52 AM