Don't ask me how Social Security works, I have absolutely no idea how they calculate things, however I do know that they very rarely make mistakes.  I say this because for the 2nd year in a row they've dropped a chunk of change into my checking account.  You see, I am retired even though I'm not old enough to retire.  Three years ago I noticed a weakness in my right leg which continued to worsen until I started falling down... a lot, like 6 times in one day.  Diagnosis?  Severe arthritis in my lower 5 vertebrae - no pain, just no strength.  Thinking I might end up being disabled for the rest of my life I retired.  They were going to perform laminectomies on those 5 vertebrae... until I started to walk again... on my own... without surgery.  I healed myself... at least that's what I think, rerouted the nerves and taught myself how to walk again.  I've been told I walk with a slight limp, and that I don't lift my feet as high as everybody else, but I'm doing up to 50 minutes or more of cardio every other day (except today which is a rest day).  Anyway, Social Security looks at my monthly wages and using their very obtuse calculations decides that I deserve a one time pay out, once a year.
On the Idiot scene, or at least in regard to haters given a position by the Idiot in the White House, there's the Jeff Sessions hate-athon he had with the Alliance Defending Freedom group recently.  Was anybody out there surprised he'd jolly up to such hatred?  I wasn't.  This guy is a part of that all white, Crazy Christian club that aims to have an all white, Crazy Christian America - if you're not one of them then you're against them.  You see, for them, that would be Heaven on Earth:  America the White and Crazy Christian.  And you had better believe that they are nuts!  Was it yesterday that a number of them gathered in the White House and laid their hands on the Idiot in prayer?  They have no idea he's a Christianist.  They believe he's going to help them legislate their hatred into reality, and he will do what they want because they praise him and douse him with accolades.  It's his ego, you see, every time they lay their hands on him, he believes he becomes even more supreme.  What did Forrest say?  "Stupid is as stupid does?"
Well, I'm going to run off and pay my taxes (not fun) and hit the supermarket.  I'm thinking I make bake bread this afternoon.  You know what they say, "it's all in the loaf." 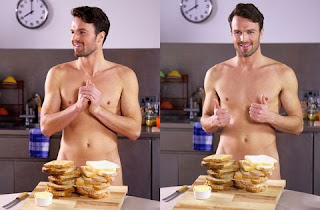 They do say that don't they?  Or is that just Heaven on Earth?