Bring on the Cone of Silence!

Okay, so Reince is out of there... so's Spicer, and some other RNC dude.  Looks like the Idiot is cleaning out the GOP - of course any one with half a brain expected that, but that's fine.  I read this funny article which described the White House as Chaos.  Of course, when I read 'chaos' I thought of Get Smart (an absurdist spy comedy from the 60's).  This is pretty much what we have in DC, isn't it?  I mean, can't you see the Idiot forcing everybody to use the Cone of Silence?  Let's face it, this might be the only way the Idiot can stop leaks. 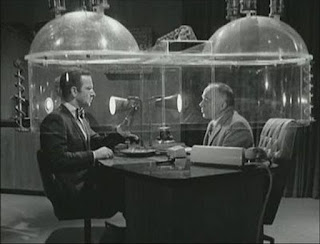 But then, isn't he already living in some form of vacuum?
And then I saw this funny bit from Erick Erickson, evidently some conservative talking head:

"The president told everyone that only he could do the job and he would drain the swamp,” wrote Erick Erickson, an influential conservative radio host and blogger. “Instead, he’s dammed up the swamp, put a party boat on it, and has turned his attention to Twitter."

That made me laugh, too, and you can be that boat has lots of grab-able pussy on board, not one whom has the last name Mulkowski (I don't think he and his administration like female Republican Senators).
Anyway, as we all knew a long, long time ago, the shit storm with which he surrounds himself is expanding.  Soon we shall be seeing gale force winds of destruction as he continues to eliminate Conservative Republicans in order to replace them with Trump Populists, a political movement that was, for all intents and purposes, stillborn.