Send it back to its hole

So, the Idiot in the White House gave a speech to Congress last night.  I understand the Republicans were besides themselves with glee.  The Democrats treated him the way the Republicans treated Obama.  And Dt said something to the effect of "it's time to put away our trivial fights," and his supporters glowered at the Democrats.  They're so stupid.  Anyone who's paid any attention what so ever to the GOP knew he was talking to his own party.  Unifying the Crazy Conservatives, the Fiscal Conservatives, and the Social Conservatives behind any one plan has always proved to be an insurmountable problem, even though they control both the House and Senate.  Remember W?  He tried the immigration thing and failed miserably.  You see Fiscal Conservatives know how many billions those illegals add to the economy every year.  And you know the Social Conservatives are saying to themselves, "you know, if we could convert them we could grow our base!"
And while the Idiot in the White House was talking, I was playing Gears of War 4, a chapter called Send it Back to Its Hole (and you thought I was talking about DT).  Truth be told, they are both monsters, but one shoots out fiery torpedoes from its chest, the other just stinks to high heaven.

If you look closely, you can see a bit of a resemblance.
Anyway, the GOP is never going to get its act together.  I read that Lindsey Graham (another horse's ass) has already said that DT's budget is DOA because of the $$$.  Which will make the Idiot in the White House look like... well, an idiot.
And, since I like to play games in which I look hot as hell, I thought you might like to see what I look like in Gears of War 4. 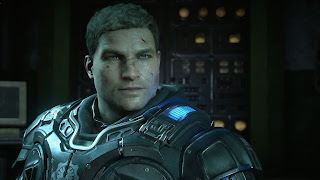 Now is that steaming or what?