Disney's not so shocking shocker...

In case you've been living under a rock, word screamed across social media about the shocking truth in Beauty and the Beast.  (Take a deep breath... now).  Le Fou is gay.  (Have you started breathing yet?)  (Do you need me to call the EMT's?)
Now, I don't know about you, but I heard that and I... well, I had to scratch my head.  Didn't anybody see the original animated film?  Or, God forbid, even listen to the lyrics?  Evidently not.  Twenty-Five years ago, when I sat in the audience watching his scenes, I thought his sexuality was inherently apparent.  I must have been wrong... no, of course I wasn't.  You can't tell there isn't one Evangelical parent out there who wouldn't have shit a brick if they'd heard their little boy saying "gee, I want to grow up to be like Le Fou."  So, be prepared, because a lot of them are going to start stamping their tiny feet in anger.  A Million Crazy Christian Moms, will probably mount some sort of Crazy Christian boycott, which, like most of their boycotts will fail. 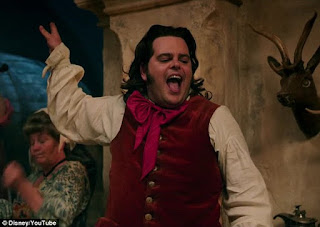 In the end, this movie is going to make a killing at the box office.  Josh Gad will probably be nominated of an Oscar for Supporting Actor.  And as for all of those faux complainers and whiners out there?  Their narrow world will get a little narrower, their base shrink just a little more, and they will fail.  This is how life is.