So, I understand there's a Nor'easter moving up the Atlantic Coast... actually the storm is about 100 or so miles off the Atlantic seaboard, and we're supposed to get some snow... maybe.  Nobody knows how much.  Mass confusion reigns at the National Weather Service... and Accu-weather is hyping this storm's potentials.  Right now they're forecasting 6 - 10 inches from Monday evening thru Wednesday afternoon, which is about 1" - 1.5" every six hours.  That's right, this 'even' is going to be spread out over 36 hours.  People are talking about it because of the potential.  We pulled all of our snowblowers from the overhead - a sale is a sale.  I'm off Tuesday and Wednesday so this is pretty much a moot point.
In fact my only concern is Tuesday evening, I'm supposed to go to the movies - either "Logan" or "Kong Skull Island." 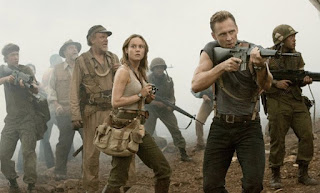 I've never been an X-Men fan and don't really know if I'm that interested in seeing the end of one Wolverine franchise mutate into a new Wolverine franchise.  The Kong movie, on the other hand stars Tom Hiddleston and he wears tight shirts.  John, over at Going Gently, seemed to be a bit distracted by Brie's tits, which might mean Tom isn't sporting as much of a bulge as I'm anticipating...