After saying that Emma Watson gave the weakest performance in Beauty and the Beast, I thought that perhaps I should see if she's done anything, other than the Harry Potter movies which was anywhere close to being successful.   Nope.  Figures.
I saw that Idiot Theresa May initiated the UK's exit from the EU.  I find it interesting that during the voting the majority who approved of this mistake tended to be middle and lower class citizens, many blaming immigrants, saying they were stealing jobs.  Sound familiar?  In case you're stumped, think Mexicans.  This is interesting because and article in The Guardian makes it pretty clear that Brexit will not stop this influx.  That's funny.  I'd read earlier that a number of the financial institutions now locate in the UK will move to the continent taking jobs with them.  Oops.  The sad thing is that both there, and here in the US, there are a number of people who believe that these nationalistic tendencies are going to pave the way for better wages.  Wrong.  There will always be a lower class gripping and complaining about money.  Nothing is going to change that.  It's simple economics.  Wages go up, so prices go up.  Prices are never going to go down because the prices you pay, are somebody else's wages.  This is how it goes.  No one is going to skip their yearly raise just so your prices stay the same.  Yet all these people believe that both the Idiot in the White House and Brexit are going to make this happen.
On the really bright side, I'm probably go for a run at Planet Fitness tomorrow in the AM. 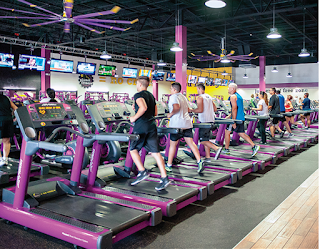 On the Monday after joining, I decided to use one of their treadmills.  Well, I hadn't been on a treadmill in almost 16 years, and I didn't know how wobbly I would be - remember, my lower three vertebrae are fused because of the arthritis.  However, one of their associates, a very nice ginger man with a beard patiently showed me how it works - quite similar to the Eliptical I have here at home.  I had no problem putting in 30 minutes at 3 miles per hour, so tomorrow morning I'm going to give it shot.  That's right... I'm going to run.