Well, even though I'm no longer in management, I still have to deal with irate customers.  Last night I dealt with a couple who needed some tile moved.  First of all, She lied, saying she'd been trying to get assistance for 10 minutes.  Anytime people throw out a time it's almost always a lie - the '10 minutes' is supposed to make you feel guilty, it doesn't.  I wish people would learn this.  And then he said "I was thinking of going to Lowe's," and I ignored him.  There are stupid people who say this to be threatening.... give me a break!  Then they highlighted their stupidity when she laid the tiles out in a pattern of four on the floor and he said "those gray patterns don't repeat"....  I said nothing.  I didn't point out that they were looking at cheap, standard gray tiles and there would be no pattern.
And then there was the man who flew into a metal clip rage.  He wanted to buy clips to hold a mirror to a wall, and he wanted them to be metal.  He had just come from Hardware, where he'd been told that the type of clips he wanted were only sold in mirror hanging kits.  That is not what he wanted to hear.  In Decor we only carry fancy, plastic clips, noting as utilitarian as metal.  He waved his phone at me yelling "here, I'll show you what I want." 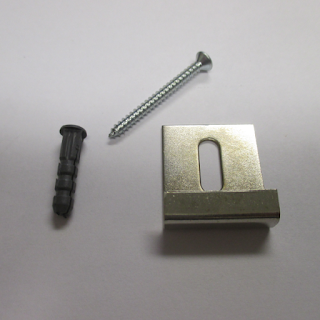 When I told him this yelled, "I don't want goddamn plastic."  So... he ran back over to Hardware and grabbed the kit, came back to Decor and, shaking it at me, yelled "I don't want the kit, I just want to buy the clips!" and threw it at me and stormed out of the store.  Now, to be honest, I could have torn open that $12 kit, given him the 4 clips and taken the hit if he'd have been even some what pleasant.  But the moment I showed him the clips carried in my department, he started yelling.  The truth is that he well have been able to buy what he wanted at our competition, or at Walmart, or KMart, or Target, or Khol's.  Instead of doing the smart thing, he chose to fly into his little metal clip rage and create a minor scene in which he looks bad.  This is how life is.
Posted by Dave R at 8:10 AM