In case you're wondering, so far the new position is going well.  I did, however, think I'd be learning more about hard wood, you know?  Like how to extend the life of your hard wood.... ain't happening yet.  I did learn quite a bit about carpeting.  Wool is one of the most expensive floor coverings... mostly because of the sheep.  Figure about one sheep per square foot, and if you've got a decent sized room... well, that's a lot sheep.
On the darker side of things, I see the Idiot in Chief is speaking to Congress today.  Be prepared, he's going to blow a lot of smoke.  Trumplodites like that, however.  They like the way it tickles.  And he's very good at blowing smoke; he's done it for years.  Heads are going to roll, we're all going to start making money, taxes are going to drop, a Wall is going to be built... all nothing more than smoke.  I have this sneaking suspicion that his supporters don't really care if he changes anything on not, just as long as he fills their smoke quota.
I mean, if you look at any news source, other than Fox News, the smoke screen the GOP has been hiding behind for years is beginning to dissipate.  The cracks are beginning to show because the only this party has ever been unified about have been their complaints.  Just look at Healthcare.  They have never, ever been able to get their act together in regards to Healthcare.  Ever.  But they could all agree that they hate the ACA.  Now they say they're going to repeal it and put their own plan in place?  It ain't going to happen.  Ever.  All they're ever going to do is blow smoke, just like their Idiot in Chief. 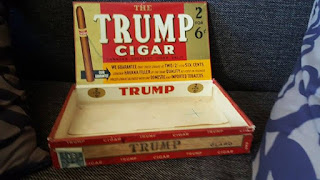 Unfortunately for them, the cigar box is empty.  They are going to run out of smoke.  And as their agenda continues to slow down, more and more people are going to realize this President, and this party is totally dependent upon smoke; no substance at all, just a lot of hate for everything they don't like.  Even now the phrase "smoke 'em if you got 'em," is beginning to cause them palpitations.