That's right, tonight the Oscars take the main stage, and they will be playing on my HD 4K Sony Bravada.  They are the only award show I watch.  I go to quite a few movies, and in spite of what some may think, the awards tend to go to the best performance, not always, but most of the time.
As I was making my dinner for this evening, I thought back to last year's protests about the Oscars being so white.  For those of you who think this year you are seeing the results... well, you're wrong.  You see, every one of those pictures with a nomination was already in production at the time of last year's Oscars.  Every single one.  In fact, if you look at Denzel or Viola, take some time and find out just how long ago they inked their contracts.  A lot of Indie Films (like Moonlight) have the constant worry of financing and may shut down production for brief periods of time; a couple of days here and a couple of days there all add up.  Location filming almost always requires licences, and usually the rental of generators so you have enough power (and we're not talking little here).  Then there's editing, and the need to reshoot scenes (which is becoming more and more prevalent). 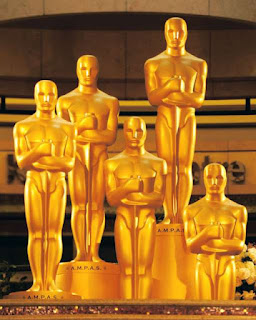 So, while people felt very good last year with their protest, the results of all of those Tweets will not be seen until this year...  And remember, Hollywood is only going to make movies they believe will make money.  Because La La Land made lots of money, you will probably see more musicals and since Moonlight barely made $20 million movies like it will stay a franchise of the Indie Filmmakers.
I hope everybody enjoys tonight's telecast, I know I will!
Posted by Dave R at 9:44 AM