I was going to write something yesterday since I'm on this great shift now... but then we had snow and I had to go out and shovel the sidewalk and the driveway.  This is how things go sometimes.
And now that I'm in a new department I'm going to have new stories to tell.  Like yesterday afternoon, this petite blonde woman came in looking for marble tiles.  I showed her where they were.  She said she was looking for a specific shade of parchment white, so said "since they're cut from a larger piece of marble, there's no guarantee you're going to get exactly the same shade."  She smiled and nodded.  I asked her if she needed any assistance and she smiled again, "nope, I'm fine."  About 15 minutes later I went back to check on her and she was gone.  However, she'd taken 11 box of marble tiles, opened them all up to check the color, and she did this by scattering them around on the floor.  55 Tiles.  She took 8 and left 47 for me to put away.  She did have a very white smile.
Anyway, yesterday afternoon, after she'd left, I was sitting at the flooring desk and suddenly there was a loud roar, like a sonic boom almost.  We do  have the Navy Supply Depot right beside us, and they do have an airstrip, so I chalked it up to a plane.  It wasn't until I clocked out that I check the news flashes on my phone and saw that the courts had ruled against DT's travel ban. 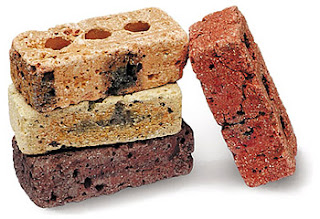 That's when I realized I hadn't heard a plane.  Nope.  I heard DT shitting the biggest, most painful brick in his life.  I suspect that sucker flew out of his ass.  And when I saw his ALL CAPS TWEET it became apparent that it hadn't been just one, but several.  That was the sound of bricks flying out of DT's ass.  Maybe we should take a moment and give thanks for that pain.  Was a lesson learned?  Absolutely... not.  But I do bet his B/P dosage just went up.