So, it's Monday and it's a Holiday and... I work.  What else is new?  Doesn't bother me though, you see I now have this fixed shift, besides, President's Day, not exactly the most exciting holiday in the books.
There was an issue yesterday with a part-time associate who transferred in from a different store.  She picked up a small, Weber grill that was on Clearance and brought back to the department in the Return's Cart.  No, no say the rules and regulations.  When I pointed that out to her she got upset because, well, you know how it goes, I had to be wrong.  Then again, I'm no longer in management so I can't yell at her... so, I'll probably talk to the Department Supervisor and let him know that he needs to talk to her.
And what about Trump and Sweden?  That who thing was so Funny!  I take it that only were the Swedes confused, so was the rest of the World.  Did you hear the collective sigh when the Idiot in Chief gave his explanation?  He saw something on Fox News and jumped to terrible conclusion and then gave voice to this dementia.  For a second I thought he was going to try and have Hollywood remake that old Bob Hope chestnut "I'll Take Sweden," with DT filling in for Hope. 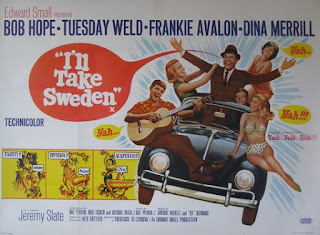 And, of course, I don't know if this is real or fake news, but the Russians seem to be a bit unsatisfied with the DT administration so far.  Look like there's another dossier in the works.  I understand the subtitle is "Bobo in Chief.