And the bodies start to fall.  A little over 3 weeks into his term, one of DT's most loyal, most strident, most vocal supporters was axed.  The purported reason is Flynn was having unsanctioned talks about sanctions with the Ruskies, however, knowing how much the Idiot in Charge panders to Putin, I suspect the communications were totally authorized.  You see, as a CEO, DT could have his subordinates talk to whomever he wanted.  He's a wheeler and dealer, remember, and there is that toasty prized of getting to be one of Putin's Pals.
Funny thing, I checked out Breitbart, (remember, it's nice to know what your enemies are thinking, and they are all so very vocal there), and while 2 or 3 voices were raised in common sense, most of them were already chasing each other around the track with the crazy baton.  There is an almost symbiotic relationship between their idiot logic and the logic of the Idiot in Chief that is difficult to ignore.  And in case you were wondering, they were blaming the FBI, and the CIA for intruding and eavesdropping on a loyal American.  Crazy is as Crazy does. 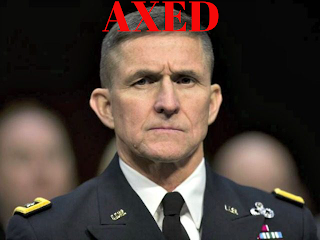 I'm sure this did not go down well with DT.  In fact, I wouldn't be surprised if Kellyanne wasn't down on her knees, scrub rag in hand, trying to clean up after the shit storm.  And Pence?  No doubt he's been grounded.
This is, of course, just the first head to roll.  There were be more, many, many more as the Idiot in Charge learns he is now going to be held accountable to the American People, and by that I mean the vast majority, not that minority of crazy conservatives who managed to get him into office.  The shit storm is just beginning.