Well, it's Thursday and yesterday revealed very little change coming out of Washington.  That's not to say news wasn't made.  A day doesn't pass without a couple of turds hitting the fan, what with all of the leaks.  Chaffetz and Goodlatte, 2 Republican chairs are calling for an investigation.  Right.  Maybe someone should tell these yokels that having a president who actually seemed... even slightly presidential, who sort of understood that giving a minority political group everything they wanted was a bad thing, might help to plug up some of the holes.  Nope.  Of course this was to be expected.  Republicans have never, ever acknowledged they were flawed, that their policies were out of touch with the majority of Americans.  And you can bet that isn't going to change any time soon, especially with this idiot president.  He's used to people backing down when he gets in their face.  "Yo, Idiot, it ain't happening!"  And things are only going to get worse.
I was reading an article in the LA Times and saw the Idiot in Chief is going to have a rally in Florida on Saturday.  They called it a re-election rally.  Odd, this gathering is going to have nothing to do with DT's re-election and everything to do with drumming up the dunderheads who voted for him.  The only thing on the agenda is "attack," anything and everything he feels obstructs.  He needs to put his supporters in a fighting mood.  Oh, and the whole things is also geared at boosting his ego.  All the negativity floating around him makes him look like a looser.  I would not be surprised if he goes off like a firecracker on Saturday. 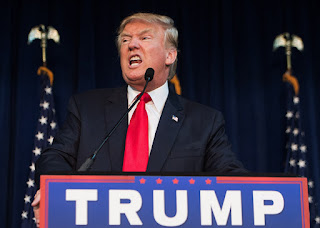 Is it going to help him?  Absolutely not.  Every time he goes off point his approval rating drops, and this whole event is being planned for him to specifically go off point.  DT is seething.  Not only is he a very, very angry man, he is a very bad man.  He used his hate tactics to get himself elected, and he will have no problem in trying to turn the country against itself.  But then, that is what Russia wants, isn't it?