And the Oscar goes to Ha Ha Who?

Well, the Oscars are over until next year.  There were a lot of surprises as the voters of the Academy of Arts and Scientists are not to be pegged down.  Some thought La La Land would sweep, I didn't, too many nominations in categories like Best Sound Editing which almost always go to films like Arrival or Best Sound Mixing which went to Hacksaw Ridge.  Here some of my thoughts:

Mel Gibson looked like he'd already had a couple of cocktails.

Jimmy Kimmel was funny... to a point, the shtick about his feud with Matt Damon went on way too long... he needed to be reminded he was hosting the Oscars.

It was not nearly as political as I thought it was going to be.

Since I never Trolls, I didn't know the Justin Timberlake song was one of the nominated songs.

Casey Affleck failed to thank his brother Ben, and let's face it, if it weren't for Ben, Casey most likely wouldn't have been there since he probably got the part because Matt Damon produced the film.

The John Legend medley of the Best Song nominees City of Stars and Audition failed, they should have been sung seperately.

I didn't like the Best Picture clips clumped together at the end.

Oh, and that bus tour?  That was time consuming mistake and was evidently a failed variation of Ellen's Pizza Delivery Man.  I think the audience was supposed to laugh at those people, and that's bad.

And then, of course there was this: 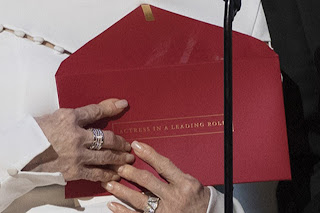 Like millions of other viewers I was... stunned.  And then I started thinking.  Now you do know that the presenters don't just grab an envelope off a table, it gets handed to them, in fact, I don't believe they're on a table at all, rather they are meticulously filed in the briefcase held by the Price Waterhouse Representative.  And, of course, my mind wondered, you know?  If you wanted to make Hollywood look bad, why not do it on their biggest night of the year, with the biggest category onf that night?  I did see that Price Waterhouse is starting an internal investigation which makes me suspect that they, themselves, suspect this may have been done on purpose.  How's that for a conspiracy theory?

Oh, and I was wondering, did DT every reply to that Tweet?