There's all of this hate emanating from those Krazy Kristians regarding Transgender people using the correct bathroom, by that I mean the bathroom they want them to use in order to make their life as difficult as possible.  And it really has everything to do with hate and very little to do with gender.  I had to laugh when I saw that Anita Staver, the very unchristian Matt Staver's wife, threatened to carry her loaded weapon into the Ladies room in order to feel safe.  What a stupid broad.  Of course, it could be she just likes carrying things that are hard and have a 6 inch barrel.  Does she even know that guns are considered phallic?
Anyway, with all of this hate surfacing as hate law in certain southern states, I wondered when they're going to go after Santa.  You know who I'm talking about.  This guy. 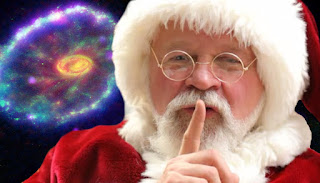 Let's be honest here.  Of course, maybe these Krazy Kristians see nothing wrong in a costumed male bouncing little kids up and down on his lap.  Santa's innocent, isn't he?  Or maybe not so.  Maybe there is a darker reason some of these men are wearing costumes.  Maybe there's a bit of a pedophile lurking just beneath the fabric, loving every bounce.  Of course, maybe it's a trusted friend or relative wearing that beard, you know, like Uncle Ernie?
With all of their foaming at the mouth, you can only wonder how long it's going to be until one of these Krazies scratches their head and asks "What about Santa?"  I doubt very much if it will be Anita Staver since I suspect she's far too busy with her pistol.