Rent for Free - the Ryobi incident

We have a deal running on Ryobi power washers running right now, and it's a good one.  Yesterday we had a woman interested in purchasing one.  Her husband is in the Navy and he'd just been transferred to Harrisburg (we have a very large Naval Supply Depot here).  Moving into a new house with a deck, they decided to get a power washer.  She looked at all the power washers and chose the good deal.  She and her teenage son carted her new buy out to her car, a Lexus, and loaded it into the back seat.  As they were leaving the parking lot they smelled... gasoline.  That's right, we sold them a power washer which had been rented for free. 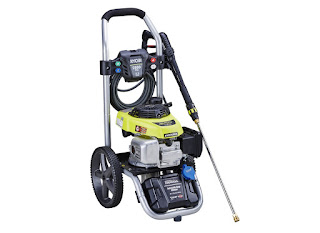 Yep, a previous customer had purchased the power washer, taken it home, put gasoline in the engine and used it.  After they'd finished cleaning what ever it was they needed to have power washed, they'd packed it back in the box.  And they did a damn good job of taping that box shut.  It looked like it was brand new.  And they'd returned it saying they'd never used it.  The Returns Clerk saw a box that was pristine, never opened, and gave them a full refund.  However, the original customer had forgotten to empty the gas tank, so when we sold that used power washer to another customer and that customer, and her son, loaded it sideways into the back seat of her Lexus, the gasoline began to leak out.
Now we could pull up the register receipts and see when that washer was returned, and we could look at the tapes and see just which individual was responsible, but it wouldn't do any good.  Rent for free, you know?  Somewhere, someone is sitting smugly thinking just how smart they were, how they pulled the wool over our eyes, with absolutely no concern about what problems they might have caused.  And another customer got a brand new, free, power washer as compensation.  Oh, and she's have the interior of her Lexus professionally cleaned, not that any gas soaked into the seat, but it's the right thing for us to do.  You see, there's always an expense when it's Rent for Free.