Rainy Days and Sundays and tidbit about Trump

It's raining here.  The temperature is a cool 58 (F).  And, of course, I'm supposed to be having a paint sale.  Not that we aren't selling paint, we are, just not in the amounts they were expecting.  Same thing happened last year.  What can I say besides "it's spring."  In fact, it's raining through out much of the state.  Because of this people are not buying deck stains and exterior paints.  There are parts of the country where it's bright and sunny and the temperatures are balmy - not here though so my sales figures are shitty. 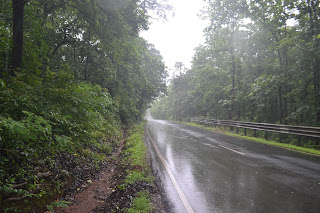 Since my bank has pissed me off, I closed out the savings account and transferred all funds into the checking.  This is step one in moving my finances.  I'm off Tuesday so I'm going to pay a visit to Member's First.  If things work out, my money will be transferred to a new account with them.  The only tedious thing I can foresee is changing my routing number and account number for the bills I pay on line, but even that shouldn't take long.
I saw that another poll was released today.  I didn't read it since right now any sort of projections are totally useless.  Their sole purpose is to get people like my friend Betsy to wring their hands wailing "woe is me, woe is me."  I did see an article somewhere which inferred that Republicans are slowly starting to get behind Trump.  As they proved with George W. Bush, they don't care how big an asshole they put in the White House.
Since it's a rainy day, I think I'm going to go take a nap.  The Giro D'Italia is rolling through Italy right now so I'll probably put that on the TV and snooze a bit.