Just a few thoughts on polls before I take Big Seig to the vet for his shots.  They are very good for pointing towards trends but very bad depicting reality.  Republican polls had shown Romney smacking the shit out of Obama and winning the presidency... didn't happen.  Interpretation is always biased, not matter how much they tell you the opposite, pollsters want specific answers.  I know this because I was polled about two months ago.  Even though I was told it would only take a few minutes, I ended up enduring questions for almost 45 minutes.  At one point the pollster actually said, "well, you're pretty noncommittal," that's because I didn't hate either Bernie or Hilary.  My strongest answers were against the Republican party, and while they were strong, they weren't hate, hate, hate.
I bring this up because this morning I was reading about a hypothetical match up, who would fare better against Trump, Hilary or Bernie, and, of course, the hypothetical match up was based on polls. 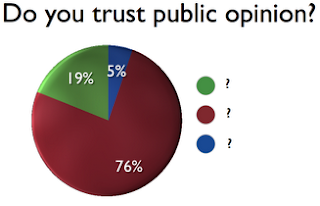 For those who have never taken a Poll, here's an example of a question:

The next question depends upon how you answer... and it's always multiple choice.  You never get asked why you chose that specific response.  So if you say you hate Donald Trump they never give you the opportunity to air your grievances, what it is about him that so turns your stomach.
The pollster actually asked me who I would vote for in a General Election.  My response:  "We are guaranteed a secret ballot in this country, so why would I tell you?"  Anyway, that wasn't the response he was hoping for.  This is life.