Memorial Day with Hillary and the Republicans

Well, here it is, Memorial Day, and I'm working.  And, even though I get off at 6 PM, I have to go to bed early because I open the store tomorrow.  Now, ain't that a deal?  They are going to grill burgers and hot dogs for the associates, try and give us some sort of picnic atmosphere, but that will have to happen between the sporadic thunderstorms.  The humidity is bad here and we can blame it on tropical depression Bonnie.  We can blame the storms on her, as well as the lack of business.  Sure, we'll have customers galore in the morning and early afternoon, but then everything slows down.  People are going to be having their own picnics and cook-outs.  They'll be sitting under deck umbrellas, or under car ports, or covered patios, sucking down cold brewskies, or sipping on an inexpensive chardonnay purchased just for this special day.  Because the weather is supposed to be shitty in this part of the country, many will go to the movies.  I understand the new X-Men film is tremendously... bad.
Politically speaking, I saw the Clintons are going to be investigated for racketeering, at the behest of the Republicans, no doubt.  I read that Hillary is considered to be ruthless and calculating, of course that's to be expected after decades of dealing with Republican hatred.  I suspect this election cycle is going to go down as one of the worst in American History... and we have the Republicans to thank for it.
We have a week to go before Bernie Sanders shows us his Bitter Bern face.  He's an angry old man going around lobbing buckets of gasoline on the fire because... he's an angry old Socialist.  That's right.  He's only been a Democrat for a year and look how badly he's dividing the party.
Anyway, it's time for me to get ready for work. 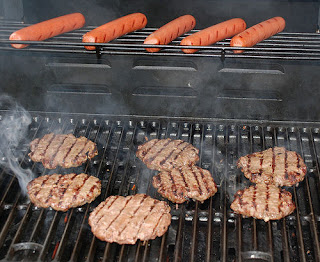 Hot dogs and burgers on the grill they keep behind the store.  Potato salad and macaroni salad they bought at the supermarket.  I am so stoked!