What the Future Holds

And so the weekend begins.  Storm clouds are settling over some parts of the nation.  Yesterday, here in lovely Central PA, we had showers, drizzles, and heavy bands of rain throughout the day.  I had planned on relocating the leaves in my backyard to the other side of the fence.  I do this every year, rather than drag them down to the curb for the street sweeper.  I like to recycle the nutrients which go into the growing of leaves back into the ground from which they came.

I got a phone call from one of my Navy friends yesterday.  It's been many years.  He was very excited.  Originally from Virginia, he has since relocated to North Carolina, and lives in a condo on an island.  He has picked up that southern drawl.  His wife passed away a number of years ago.  One of his sons has developmental issues.  I feel bad for him, that's such a chore for aging parents. A Zoom call is scheduled for November 19.  Hopefully he and a number of my other Navy friends will be there.  Here's a dark picture I took of him at a radar console while on watch.  You can see the outline of the the Tonkin Gulf of Vietnam on the console screen.  You might want to click on it to make it bigger. 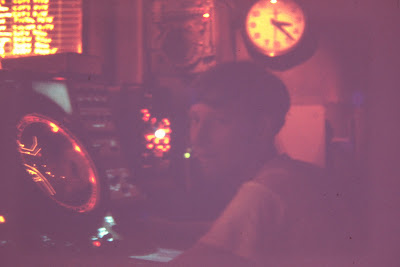 And, of course, Mark Kelly won his race to be Senator of Arizona.  Right now the count for Senators is even, each party having 49.  It's quite likely the Democrats will win one, possibly two, more.  That would be nice.  It's not quite as nice as having a majority to codify laws on abortion and marriage, but it's nice.  As for the House, in the past the midterms had the president's party losing 40 to 50 seats.  If Republicans do manage to get control, the number will be small, possibly 10 or less, which is not what they wanted.
Kevin McCarthy, who chose to hang onto Trump's nether region like a starving sucker fish, will never be Speaker of the House.  His decision to shit on Democracy has turned him into not only a failure, but a pariah for those Republicans looking for someone to blame.  The MAGA base has turned on him.  The same thing is true for McConnell.  Their political lives are over.
It will be interesting to see how the Republicans will proceed if they do manage to wrest control of the House from the Democrats.  I wonder how many of them have come to terms with the fact that America has just rubbed their noses in Trump's shit.  Remember, Republicans in general struggle with their 2 dimensionality. Stefanik from New York is stuck in the past.  She was already Tweeting that Trump will again be a candidate for president.  He's having some sort of flash and bank shit show on November 15, probably to make his announcement.  When he does, that will end the Republican party because he is all they have.