So, what will today bring?  Any ideas?  Yesterday, was fun, in an odd sort of way.  I had my driver's license renewed.  While this may seem a mundane chore to most, this was my first time at the new PA driver's license office, which is located in Enola.  That's right.  No driving into downtown Harrisburg anymore.  Not only is it in my home town, it is, as the crow flies, about 3/4 of a mile away.  The building used to be a supermarket, now it's used solely for renewing and applying for driver's licenses.  My visit was fairly uneventful except for one thing.  Now, everybody knows their picture on their driver's license looks like crap.  Well, there was this blond woman who wasn't satisfied.  From where I was sitting, I could see the screen with her pictures.  At first there were 2, which she didn't like, so they took another, and another, and another.  She kept dismissing them all.  I laughed.  The only time anyone is going to see that picture is if you get pulled over by a traffic cop, or if you're getting carded going into a bar.  At her age, she was definitely not going to get stopped going into a bar, so I suppose the police must pull her over a lot.

I went for an 11 mile ride in Oregon.  Small hills, and fairly flat.

Also, for those looking to buy an appliance, the big sale starts today.  This is the Black Friday special.  Pay close attention.  This sale ends 12/1 and a Christmas sale begins.  That sale is not as good.  Of course, most people will think this is one continuous sale.  Tricky, we are.

The rest of the pumpkin pie is gone.  Good.  Now my hellish carb addiction is satiated, at least for the time being.  I made 2 stuffed peppers.  Since I had a couple of plum tomatoes on hand, I made the sauce, too. 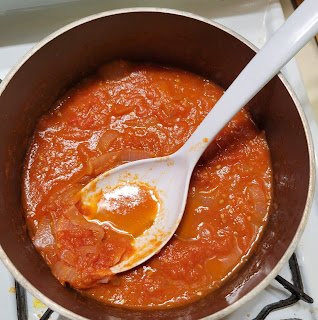 And last evening I saw the pertinence in yesterday's blog.  Evidently Kash Patel was given immunity to testify.  This is going to be very tricky.  The immunity covers a very narrow area and has no effect on other crimes he may have committed.  He will sit there with an attorney who will prod him to use the 5th as often as possible.  Even more important to remember, is that Patel is a lying sack of shit; he's prone to falsehoods and partial truths, what ever he thinks will save his ass.
Biden spoke last night.  I didn't watch.  I'm doing a replay of Assassin's Creed, Valhalla with studly Alexios.  I don't think I need to tell you that everything he said was true.  We may end up with several years of chaos if a number of election deniers win.  I'm thinking the Democrats are going to keep the Senate, and possibly the House (by the skin of our teeth).  I'm thinking we're going to do better than the Republicans think.  Why?  Because on a Fox Townhall, J.D. Vance, a celebrity non-politician who thought this would be a cakewalk, said he thinks the abortion issue would be settled if we went back to Roe v Wade.  Does he believe this?  He may have written a bestseller, but when it comes to the American people his brain is witless.  He's just being tricky.  When lies fail, Republicans turn to trickery.