Hello Sunday.  A slow day.  Outside the sun is shining, and the temp is 41 (F) outside.  It's supposed to drop below freezing tonight.  It is that time of year.  As long as I have heat, it doesn't bother me.  I had been thinking of buying a new coat, but I'll put that off because of my new laundry room investment.

Yesterday was meh.  I have a hiatal hernia which acts up every now and then, yesterday was one such day.  I take omeprazole, but not regular.   That's going to have to change.  One of the unjoys of growing older is that your body does begin to slowly break down.  Things don't work as well as when you were young.  I did end up taking a personal day off from work.  That happens very rarely now that I'm semi-retired.

I did spend most of the day watching the results slowly drip in.  That was fine.  I didn't really have anything better to do.  I was pleased to see this. 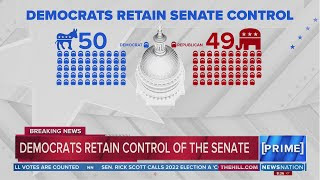 During a midterms where every where you turned there were headlines about a red wave, the above little graphic is simply amazing.  Who'd have thunk?  Well, I did, for one.  But so many others were biting their nails in anxiety.  Pundits and polls both shrieked of a red wave.  I got up around midnight on Tuesday to let the dogs out and saw that Fetterman had won, and new it wasn't going to be bad.  But this is great.  If we win the runoff in Georgia, we will have 51 seats in the Senate.  The Republicans might take the House, but they're so roiled with losing, dealing with the fact that Trump is killing their party, and congressman who as so stuck in their old days, they'll need Democrats to get anything passed.
Of course, the lies about election fraud are happening.  Republican hate mail in voting, so there are rumors about ballot dumps being spread.  The truth they don't want to understand is that they did this before, and it only worked with Republicans... and they ended up losing.  They need to come with a new strategy, one that revolves around honesty.