The temps outside are a cool 26 (F).  There was some snow in the forecast yesterday, but we're too far from the lakes for them to effect us.  Not so for Buffalo.  They've had 5 feet  (1.52 meters), with more on the way.  Of course the climate deniers will be pointing at this and ask how can be global warming when this happens.  Believe me, many have tried, there's no fixing stupid.

Yesterday was busy.  Just because I chose to sleep in doesn't mean I didn't get much accomplished.  I did.

This afternoon, I have a Zoom call with my Navy buddies.  That should be interesting.  These calls have turned into an annual event.  It is interesting to see how age is effecting us.  Some are handling the years gracefully, others, unfortunately, are having difficulties.  By the same token, some of us have been more successful than others.  That alone is very interesting.

Final prep work for painting the new laundry room will be finished by the time I sit down for in front of the camera.

So, I'm into the final chapter of The Body Under Ice, tentatively titled:  Karaoke.  Tell me, do you think somebody is going to sing?  While this picture has nothing to do with the book, I'm surprised no one has made this into a movie yet. 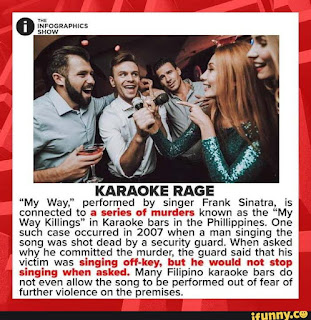 And Merrick Garland has assigned a Special Council to multiple Trump cases; he and his supporters are flipping out.  Badly.  The move was done to take away any implications that what is going to come, and it is going to come for those waiting in anticipation, is not politically motivated.  Jack Smith is now, and has always been registered as an Independent voter.  He has a reputation for bringing his investigations to a rapid conclusion.  He wins.  Knowing how meticulous Garland is, a man whom also wins, this decision was made some time ago.  I wouldn't doubt if Smith has already been hard at work.  Indictments are coming.  Notice I'm using the plural form.  I wouldn't be surprised if multiple people find themselves on the wrong end of the law.  And some of those other people are frightened.  The tenor of fear in their voices says so much (also notice, I didn't say sing, that's too bad of a pun).