The holidays have arrived, or, at least they will in relatively few days.  First up will be the crassly commercialized Thanksgiving with its football, followed by that ever popular Black Friday.  Is it me, or does it seem like corporate retailers no longer have dominion over the American Household?  Not that there still aren't enough wack jobs out there who fail to realized those great deals are nothing more than corporate manipulation.

Anyway, I am scheduled to work today.  I'm supposed to be an appliance salesman.  They do this every year.  Usually, it doesn't happen.  I almost always hang around the flooring desk.  Today, will probably be the same.  You see, I'm scheduled to start at 0930, and the temps are cold.  Not quite bone chilling, but a very brisk 22 (F), outside.  Customers might venture out this afternoon.  And there are a lot of wack jobs out there who still think the best deals are only on Black Friday.

I worked yesterday and it was oh, so slow.

Tomorrow, the electrician comes to install my dryer hookup.  He will also be installing 2 outlets, one in the kitchen, and another upstairs for the washer.  These are dedicated lines.  Nice.

A lot of America is talking about what happened at Club Q.  Another tragedy.  One thing that I read yesterday stands out above all else: two unarmed gay men did what the heavily armed police force in Uvalde couldn't do.  Take a few minutes and let that thought sink.  They took the shooters handgun away from him and hit him with it.  I hope they hit him in the face, maybe broke his nose, and all in self-defense.  Two minutes after the police arrived, this 22 year-old loser named Aldrich was in custody.  Five poor souls died, but the actions of two unarmed gay men saved countless of others.  America saw a sense of strength in Colorado Springs they were not expecting. 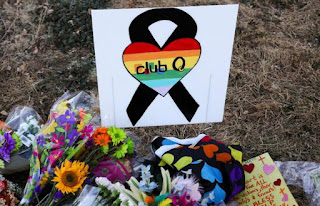 I saw where Elon Musk quietly reinstated Kanye West on Twitter, and the exodus continues.  For those worried that Trump might actually return, I understand he has some sort of financial commitment to Truth Social.  Money is the golden calf he prays to.  West's anti-Semitic Tweets will appeal to a certain crowd, a group whose numbers do not nearly compensate for numbers of people who are leaving.  I'm actually wondering if Twitter does go under, if he can somehow claim his $44 billion investment a loss, and use it as a tax write-off.
And finally a funny.  I read that what corporate American wants most from the Republican controlled house is a $183 billion tax cut.  Corporations donate a lot of money to Republican Super Pacs, and that's what's important to Republicans, not the American people.
Posted by Dave R at 8:10 AM