The Death of the Republican Party

Saturday.  As usual, I will be working this afternoon.  Only for 6 hours, however, I will be taking leftovers for a mini-meal.  Eating when I get home, around 7:15 PM, is a little late for me..  The orange retailer I work for gives me a 15 minute break, so I 'break bread' so to speak.

Work is continuing on my kitchen ceiling.  The contractor is doing a really great job.  She is young, mid-20s.  If I'm satisfied, I will have her back to do other work.  As we age, it's best to have either or handyman or contractor to take care of the upkeep.  I don't mind paying.  Here's a shot I took yesterday.  The wall to the left is going to be drywalled over in the spring and probably a cabinet or two will be hung.  You can never have enough storage in a kitchen. 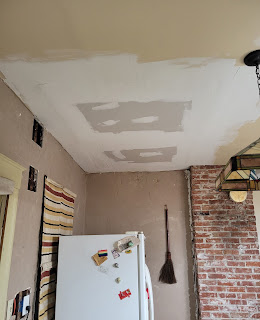 I was going to put a cabinet in the new laundry room, but am now beginning to think along the lines of a rolling cart with possibly wire baskets.
Evidently The Former Guy ruffled some feather by hosting a dinner with Kanye the Anti-Semite, who, supposedly, just happened to bring Nick, the pro-Nazi white supremacist as a guest.  Now tell me, why would anyone be surprised?  Does anyone think trouble might be brewing?  Is Trump foreshadowing in plain sight?  Wouldn't surprise me in the least.  Trump is not stupid.  He wants to be a huge player in world politics.  The Republicans thought he was their savior, Reagan reincarnated as a grifting conman, uniting America.  He isn't, and was never going to be another Reagan.
I noted previously Billy Barr saying Trump would destroy the Republican party if he didn't get the nomination.  Well, this should come as no surprise, but he's going to be destroying it a lot sooner.  Like... oh, say, after he gets his first indictment.  On Thanksgiving he posted "give me freedom, or give me death" on Truth Social.  That was his first salvo.  He is prepping all of those MAGA and Qanon loyalists.  His comment was in a similar vein to what he was Tweeting before January 6.  The instant he makes his first perp walk, he wants them to rise up.  In his eyes, Kanye and Fuentes are allies.  Remember Portland, OR during the BLM protests?  Well, that's what the Orange Anus envisions, lots of Portlands  springing up across America defending him.  When that happens, the Republican party will be dead.  No ifs, ands, or buts about it.  He believes Civil Unrest will save his ass and carry him forward.  It won't.  We had a Civil War in which leniency reigned, the leaders went free.  That will not happen this time.  America will have had enough of this shit.