Well, a happy late good morning to those you normally read Riding On while enjoying their first cup of coffee.  And no, I didn't stay up late and sleep in.  I had an appointment for bloodwork at 0730.  They took five vials of my iron rich, 100 % proof DNA filled blood, as well as a small cup of urine, which smelt like black coffee even though it was a pale yellow.  This is all prep work for my physical which is scheduled next week.  Tuesday, to be precise.  Not only is November 8 my birthday, it's also election day. Make sure you all give me a very nice present.

After I finish this entry, I'm going to round up the dogs so the 3 of us can take a nice nap.  Both of them were restless last night.  Lily had to go potty outside twice.  Biggie?  I have a small stash of biscuits in the bedroom and didn't that stinker lay in front of them and whine, like he hadn't been fed in weeks.

I got the estimate for fixing the kitchen ceiling.  Not bad.  Work will start after the electrical work is complete. 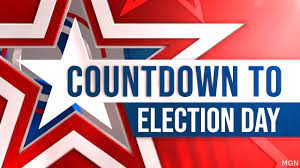 I'd say let the countdown begin, but it began a long time ago.  If you think the Republican party has been vile so far, prepare yourselves, you ain't seen nothin' yet.  Elon Musk either has, or will shortly, terminate some of those associates on Twitter who were moderators.  No matter what he claims his intentions are, free speech, for one, don't believe him.  He doesn't care what people Tweet, as long as Twitter becomes a money maker.  To this end, he will permit Republicans to lie like hell, and be as morally degenerate as they want.  His accountants are looking at the numbers.  The more followers Tom Fitton has, or Tulsi Gabard, the better it is for business.  He's raising the $5 for being verified to $20 per month.  It's all about the money.  He will ruin it of  course, that's because he's the Chief Twit.  For those who don't know, he did Tweet that now he's the Chief Twit.  I don't think he knows just what a Twit is.
And, as I said, the election draws nigh.  Because of this, every wannabe political pundit is going to be citing polls.  Believe them not.  Do not believe that America is more concerned in the economy and crime than it is the flipping of Roe.  Polls create drama.  Drama means clicks on media websites, and that generates a corporate desire to purchase ad space.  And so you'll see headlines  such as "Walker leads Warnock by 3%."   It's all horseshit.
Posted by Dave R at 9:24 AM