Hello, Standard Time!  I hope everybody enjoyed their extra hour of sleep this morning.  I got up at my standard time, which meant I didn't really gain an hour, it was just an hour earlier.  Now I have an extra hour to get things done before I go to work.  Sadly, the daylight will continue to shrink for another month and a half, give or take a day, so it doesn't matter if it's Daylight Saving Time or Standard Time, it will still be dark when I leave work.

Work was slow yesterday, I suspect many people wanted to staying to preparing to watch the Phillies lose.  I'm not a big fan, but his morning when I got up (at my standard time) I thought of Anne Marie. She was a huge Phillie fan, so I'm fairly certain she would be rattling the rafters with her above average vocabulary.

Outside, the weather is warm and very humid.  We've been having showers on and off.  There's an 80% chance of rain today, and so far we've hit that percentage 100%.  That's a win, win for the forecasters.

In the front yard, my gingko is fully yellow.  Those leaves will probably hang on until Tuesday, when the temperature drops, and then they'll fall like a golden shower... wait, that phrase might be a little too graphic visually, so how about if I say they will fall like yellow rain? 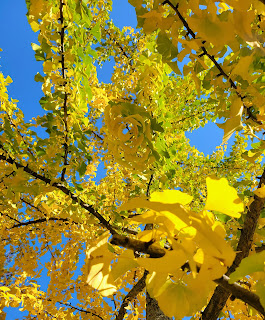 The midterms are approaching.  I find it fascinating that over 1 million people have already voted by mail in Pennsylvania.  This means it's going to take a while to get all of our votes counted.  From what I'm seeing, 70% of those are Democratic.  This is what Republicans hate.  They also hate early voting.  They have this belief that only patriotic Americans will vote, no matter how difficult they make it.  These beliefs not only hurt many different voters, most especially senior citizens, a group tending to be conservative.  Of course, you know Republicans will blame the Democrats if their senior citizen votes decline.  They are the party of blame.
We do need to steel ourselves because, should they lose on Tuesday, they will turn into the party of rage.  They, like their orange assed savior will be very upset that American has rejected them.