Washed Out to Sea

I had baked a pecan pie on my birthday.  Since it's recommended I cut back on high carb / high calorie foods and I didn't want to throw it away, I ate it yesterday.  The entire thing.  I mean, I wasn't about to throw it out.  Why would I waste food?

My brother's taking me out for breakfast this morning to celebrate my birthday.  I will probably eat toast, and several other things.

I am going to stop baking bread for a while.  I bake it frequently, and just as frequently, I eat it.  So many carbs.  I am a carboholic.  Always have been.  Candy, too.

Today is also a work day.  I really am tempted to call in and take a personal day.  Probably won't.  Either way I'd get paid 8 hours.

The woman fixing the drywall on the ceiling just realized she had scheduled the repairs over Thanksgiving, a natural mistake since I didn't really know when the holiday was.  She sent me an email asking to start a day earlier.  I just sent her an email asking if she could start after Thanksgiving since the Electrician is scheduled to be here on 11/22.  I'm waiting for a response.

Here's a shot looking out my front door.  Notice the bright golden leaves of my gingko? 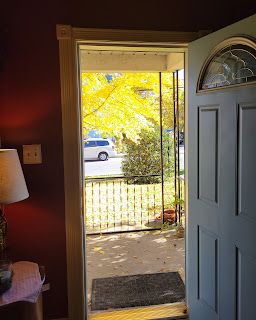 And wasn't yesterday fun?  Holy Crap.  Benny Shapiro flipped out on Twitter, blaming the Orange Anus for everything.  The OA, himself, flipped out because it's never his fault.  His entire life has been spent shifting the blame to someone else.  In this case, the blame needs to be spread over the entire Republican hierarchy.  They've been setting themselves up for this ever since they managed to stack the Supreme Court.  Calling your political opponents every name in the book is a fail; the MAGA brain is incapable of understand just how bad the Nazis truly were.  Overturning Roe v Wade hurt the GOP badly.  Their intent to tell women to "shut, we're in charge, and we're going to tell you what you're going to do," simply failed.  America is Centrist, not Conservative, so trying to force Conservative values on the entire country will never work... unless you live in Florida.  Of course, thanks to climate change, Florida will soon be washed out to sea.  Will Republicans learn anything from this?  Probably not, rocks don't think.