The Shame of it All

Six hour shift today.  No problem.  Then it's 3 days off.  I can handle that as well.  Most of my schedules now are around 24 hours a week, which is what I intended.

Oh, and in case anyone is interested, it rained like hell yesterday.  There were showers on and off through out the day, however around between 4 and 5 PM that changed to steady rain, and wind; what you'd call a long soaker.  The dogs refuse to go out if they think it's too heavy, so they waited until a little after midnight.

I baked a loaf of olive bread yesterday, it's tasty, however I chopped my olives so fine you don't really taste them that much.  The recipe also called for using the olive brine... I think I'll skip that next time. 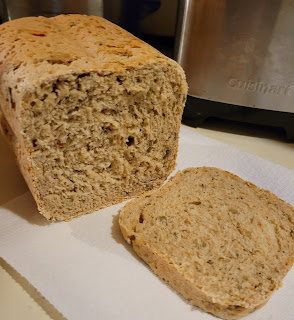 Adam Kinzinger announced his retirement yesterday.  Many are saying this is happening because of Trump.  More than likely the real reason is that there has been redistricting in Illinois and his new district encompasses many Democratic voters and... he's a Republican.  I was wondering if this was going to happen when I saw the map changes a few weeks back.  This is a shame since he's one of the few Centrist Republicans who hasn't sold his soul to the spawn of Satan, Donald Trump.

And, speaking of souls, I do feel sorry for those people down in North Carolina having to deal with their Lt Governor Mark Robinson, a man so filled with hatred he seems bloated.  Oh, wait, I must apologize, he's not bloated, he's just fat.  Oh, wait, that's rude, he's extremely corpulent and has no shame.  And this Cracker Jack Crazy is filled with hatred.  He wants a Christian Authoritarian government, and there's no doubt that if you don't fit into what he wants, he will make you pay.  My money says he hates those idol worshipping Catholics.  I'm not going to bring up Muslims, or Hindi's or Mormons since history has already shown us what Zealots do those people they call heathens.