And here it is, Sunday morning.  After today, I'm going to have 3 consecutive days off as I move into my part-time status.  One thing that's going to change is the way I do laundry: all in one day.  That doesn't need to be the case anymore.  I can do a load one day, a load the next, and so on and so forth, if the mood strikes me.  Will I?  Nah,  I like getting it out of the way.

Yesterday was rather busy at work... in the morning and early afternoon, and then the customers thinned out.  Evidently there was Penn State football on TV last evening.  Being an hour and 15 minutes south of the university, just about everybody in the area is a fan.  At one time, when I was growing up, they were one of the winningest teams in college sports.  I don't think they're so much now-a-days.  Too many controversies.  The god Paterno turned out to be much less than a demi-god.  One thing, and many of you may find this difficult to believe but traffic is always terrible when there's a home game, even this far south.  Before Covid, (cough, cough) this is what Beaver Stadium looked like, and yes, it is called Beaver Stadium. 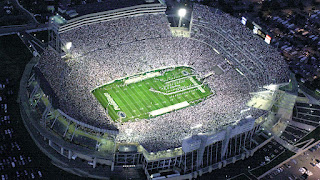 There are at least 2 associates out with Covid at the store.  One of them called off for 2 days, and then came back to work before being diagnosed (cough, cough).  An anti-vaxxer Republican, if you had any doubts.  Nationally, the infection rate is declining, however, that's only the case when you look at the entire country, and those states with a high vaccination rate.  Those states, like Alaska, and Wyoming, and Texas, and other Red States, where the anti-vaxxers dominate, people are still dying.  Over 3000 a day, and mostly anti-vaxxing Republicans.  I was talking to a fellow associate yesterday pointed out that this was a lot like watching Judgment (Cough Cough).  And I had to agree, this is like watching Slow-Mo Judgement.