Difficult to believe, but the temps here are supposed to go into the upper 70's (F) today.  Yesterday we topped off at around 62 (F), however there is rain in the forecast again.  In fact, for the past week our skies have been overcast with showers on and off throughout the day.  Climate change, you know?  If this continues, and the temps drop, we might have a very snowy winter... or we might end up like Seattle.

I got over 8300 steps in yesterday and they were done at work.  Improvements continue.  Cori, my cover artists told me "you're no longer all hunched over when you walk, like a 95 year old man."  She's right.  Bending, however, is a problem.  Don't ask me to bend over.  Ouchey, Ouchey!  If my lumbar vertebrae are fusing, this is going to be a continuing problem.

And, speaking of Cori, we were talking about the cover art for The Body in Repose yesterday.  This one's going to be interesting.  She asked me where I wanted that thing that looks like a rocket ship, and then she laughed, telling me she knew it wasn't a rocket ship.  Ha. Ha.  This is what she was talking about.  You might want to save this and then compare it to the final version. 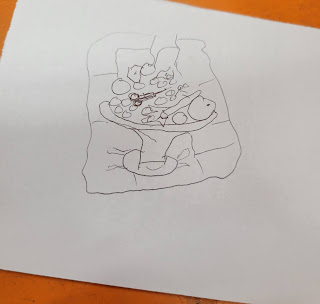 I saw that the Cowboys for Trump are pissed at him.  Actually, pissed might be just a tad to mild.  I like the bit where the founder, Couy Griffin, (and this is me paraphrasing) claims the shouted 'lock her up' for for years, and Loser #45 said he was going to do just that... and not only didn't Loser #45 follow through with his promise, he's letting his supporters be the ones who get locked up.  That's right.  Trump the Liar wants absolutely nothing to do with those people who showed up in Washington on January 6 to stand by him.  In his mind, they got caught so they're the losers.  You'd have thought they'd have realized by now he wasn't sent to give them what they want, he's here to destroy them.