I'm not really official yet, not until the end of this week, however the thought of working and 40 hour week was not what I wanted, so I scheduled a vacation day - 3 days off, four  on.  My new part-time schedules are interesting so far.  Two weeks out, I'm scheduled for 29.5 hours, which is my book is bordering on full-time.  This may have to be changed.

People keep asking me what I'm going to do now that I'm part-time.  Why is that so important to them?  There is no specific agenda, in case you're wondering.  More free time to do what ever I want, what ever that is.

Tis the season of mice, and since they're not likely to stop breeding, mousetraps were picked up yesterday.  I used to buy white plastic ones, however, they barely survived a season, so this year they have been replaced by wooden ones. 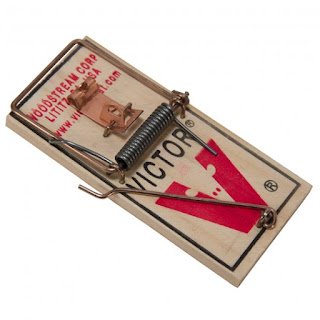 And, of course, the Supreme Court's new session begins today, and the justices are being scrutinized... and they don't like it one bit.  They claim they're not using the 'shadow docket,' even though there's no way for them to hide how often they are using... the 'shadow docket.'  This court was loaded for one purpose, to give the religious zealots in the country the power they're dirty hearts have been craving for so very, very long.  What kind of life do these Cracker Jack Crazies want for America?  Look to the Puritans if you want am idea.  Yep, they wants to live a life of prayer, and worship, and Puritanical Hell.  The voters of American need to stand up for their personal rights and put these crazies out to pasture.  Shut them up.  Shut them out.  Shut them down.
Posted by Dave R at 9:44 AM