Today is Sunday.  Today is also my last day as a full-time associate.  I will celebrate this evening by stopping off on the way home and picking up a small bottle of wine (I don't do the large bottles anymore).  People ask me, "are you retiring?" Then I tell them I'm still working part-time.  Some understand, some don't.  Personally, I think retirement is a bad word, to me it implies being put out to pasture: you retire something that is no longer useful.  That's a terrible thing to tell a human being, that they're no longer useful.  The opposite of useful is useless.  Sadly, there are some who don't understand this.  Friends have told me "I've worked all of my life, I don't want to work anymore."  Not me, and not for many other retirees.  Some travel, some take courses, they go to they gym, they get involved with causes.  Retirees volunteer.  Many still work part-time jobs because no one wants to spend their last years sitting on their and slowly feeling more and more useless. 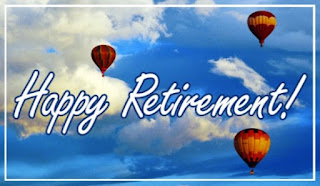 Rain is in the forecast for today.  This means should be slow at the store.  Yesterday we were busy until mid-afternoon, and then things slowed down.  I was not bothered at all.  In fact, the lack of business allowed me time to walk.  I got in over 7500 steps.  Back when my disc issue erupted, I was lucky if I managed to walk 2000 steps.  This is a sign of improvement.  Walking is always good for back issues if you can get past the pain.  I have this sneaking feeling that by the time they get around to giving me my shot, I won't need it.  That's fine with me.

Maureen Dowd has an interesting piece in today's New York Times about the Supreme Court.  They are going to be making decisions supporting a minority viewpoint, and for some reason that's not sitting too well with them.  They don't want to be branded as hacks, yet they are running head first into the branding iron.  She's dead on when she makes a point about the Bush / Gore election, when they chose to stop a recount.  That was the moment when they first started eyeing up that branding iron.  The sad truth is that like most Conservatives, they don't give a shit about America.  They're too selfish.  They don't care that a large majority of Americans thinks they're hacks, and losers.  They have that "we're in charge, so shut up mentality."  America is Centrist.  America is diverse.  And they hate those two words because they take the control they crave out of their hands.  Vote the Blues out.  Vote them into oblivion.