Ah, my Sunday has arrived.  A day for relaxation... kind of... I guess.  Right now we have spotty drizzle and fog.  The temps today in Central PA are supposed to hit 79 (F) which his hot for October.  In fact, for the next 5 days we're supposed to be sitting on the warm side.  It makes me wonder how this winter's going to be... global warming, you know?  Last year we had no snow.

I'm getting a new HRM chest strap today.  I've been using one that is old... maybe 7 or 8 years old and there are some connectivity issues.  Nothing lasts forever.  It was used heavily and was well worth the price I paid.

Yesterday I went to the gym as well as rode San Remo's 14 mile ride.  Of course, I then went and ate about a pound and a half of pasta and half a loaf of bread... and enjoyed every calorie.

And, as I was going to my neighborhood Giant supermarket yesterday, there was a bee rubbing pollen from one of my dahlias.  Well hello friendly pollinator! 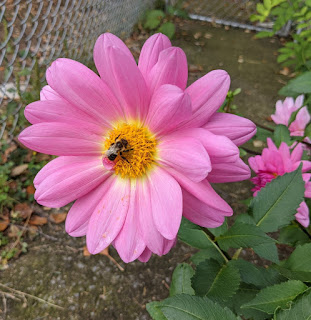 In case you were wondering, there were also bees on my zinnias.
Of course, the Idiot Jerk is clamoring for Billy Barr to indict Hunter Biden.  Can you smell the stink of burning desperation?  Funny thing I read:  if Barr does as the Idiot Jerk wants, he will prove himself to be the biggest political hack in this country's history.  Gee, I thought he'd already proven that point.
There's also another failed stimulus package in the works.  The Idiot Jerk wants congress to go big... he needs the points.  McConnell is saying "no way, not before election day."  Everybody except the Republican Party realizes this is necessary.  The economy is slipping into darkness because their president didn't handle the virus correctly.  China did a full lockdown, their economy is reviving.  The Idiot Jerk played golf instead.  There had been talk of a 2nd wave... and we're heading into our 3rd because of the Republican Party.  This is going to crush the Midwest, and our recession is going to be far deeper.