Sunday... I'm sitting eating my breakfast.  Planet Fitness opens at 0700.  I have a new app: Gym Genius.  This will be my first day using it.  I've reset my workout schedule.  Three days at PF and 3 days on the bike and then a rest day.  Right now I'm doing 4 exercises, but that number will continually increase.  After my workout, I'm going to zip over to my local Giant (Supermarket).  I'm making roasted cauliflower for my lunch / dinner.  The recipe calls for pancetta, but I may use an alternative meat.

I've ordered 2 more ornaments for the tree.  I've started looking at size now.  What good is an ornament if it's too heavy to hang?  One of them is a lumberjack, something in the Poke the Bear series.

I'm also on my 2nd load of laundry for the day.  Sunday has never been my day of rest.

Heading to the house this with my grocery bag, I thought my dahlias still looked nice, so I took a picture.  That's Biggie up in the window. 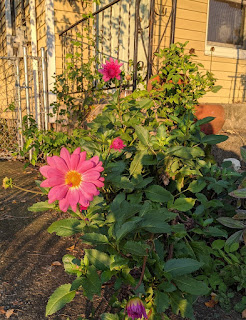 And I saw that the Idiot Jerk in the White House held a rally in Michigan last evening.  Remember Michigan?  That state where some Cracker Jack domestic terrorists wanted to kidnap the Democratic governor?  Well, evidently some in the audience began shouting "locker her up," and the Idiot Jerk, with his crusty chancre of a soul allowed it to go on because... he has a chancre for a soul.
And there was this great opinion by a Republican Strategist in NBC News.  I read this and thought, hell, that hits the nail on the head.  Believing the confirmation hearing of Amy Coney-Cumquat would distract America from the fact that their Idiot Jerk president perfectly defines the Republican party.  Remember when they used to talk about smoke and mirrors?  Well, it seems as though they've failed Gaslighting 101.  Suddenly trying to pass some sort of skinny pandemic relief fund as a way of saving their political souls is rather difficult when the killer clown is already out of the box.  The only thing you can rely them to do is totally fail to learn their lesson.  In fact, that's the only thing they've ever been any good at, remaining stupid.