And now a word from Cory Booker:

Yesterday was rainy...   Occasionally there were times of spotty drizzle, a misty dampness clinging to the lenses of your glasses you are forced to smudge away with a swipe of your forefinger.  And still, I took the dogs for a walk.  Even Biggie will go for a walk as long as it isn't a steady rain.

Otherwise, all I did was a spot of cleaning and a couple loads of laundry.  I'm in the process of switching to my new schedule: sleeping a bit later.  And I did go to the gym this morning.  Only for about 20 minutes.  It's on my schedule for Tuesdays, Thursdays, and Sundays.  My only issue was that a couple had set up shop around one of the machines I like to use.  Setting up shop means they brought over several sets of dumbbells, had their towels, their beverages, and had decided they were going to do their workout in that one spot.

The tree I ordered is 'out for delivery.'  That was faster then I had been expecting.  The fairy ornament I had ordered arrived yesterday.  He is bigger than I was expecting, at least 8 inches.  Of course, there's nothing wrong with large ornaments. 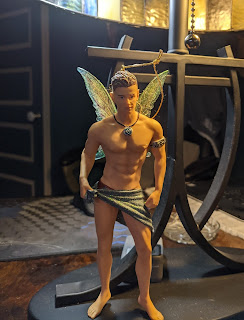 I saw where one of the Idiot Jerk's spawn, Eric, cancelled a visit to a gun shop in Michigan once it was discovered that an employee was part of that group of domestic terrorists who planned to kidnap the Governor.
And the Idiot Jerk is back on the campaign trail.  He held a maskless rally yesterday in Florida.  One thing you can count on, his attorneys will challenge every state in which Biden wins, even in a landslide victory.  He will never concede, that would make him a loser.  How do we make him pay?  Sign onto his Twitter account and every 20 seconds Tweet one word at him.  Loser!  You can bet he'll shut that account down faster than he guzzles a Diet Coke.
And finally, the sham hearing began yesterday for Coney-Barrett.  She sat there arrogantly wearing her mask believing God had put her in this position for a purpose.  Well, we all know she's wrong.  We all know she's Cracker Jack Crazy.  As for the hearing?  Cory Booker summed it up perfectly.  A minority group of people is desperately trying to shove their socially conservative beliefs down America's throat.  "This is not Normal."  He repeats that phrase several times.  We must stop them now.