Today is supposed to be cloudy, drizzly and cool... though Christmas has pretty much arrived in the great orange retailer I work for... this means it might be busy... somewhat.  Customers are picking through the Halloween decorations and believe me, they are going fast.

I did something I never thought I'd do.  Ordered one of those tall and skinny, artificial Christmas trees.  I wanted something to go between the aquarium stand and the foot of the stairs.  Small palm trees and potted plants had been under consideration for a while, but I didn't want to spend money on something that might not survive.  The plan right now is to keep the tree up all year round and change the decorations to reflect the seasons: snow flakes, icicles, and the the like over the winter for example.  Believe me, there are tons of ornaments out there anything but Christmasy.  Here's an example: 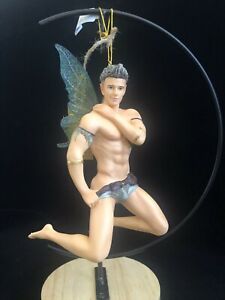 That isn't too puckish, is it?
I saw where the Idiot Jerk made a public appearance yesterday.  His physician has said that he's no longer contagious.  Of course, since his administration refuses to provide the date when he last tested positive, the belief is that he was spitting out Covid germs at the debate.  In fact, the Idiot Jerk has so far refused to prove he is actually negative yet.  Now, you have to admit, it would make pretty much sense at this point to accept the fact that he was the superspreader at the event for Amy Comedy something or other.
And from what I'm hearing, if the race is close in Pennsylvania, the Idiot Jerk and his campaign are planning on legal action to fight the results.  The operative words here are 'if the race is close.'  If the Idiot Jerk loses by say... 80,000 or 90,000 votes, if sallowy ass is fried.  So, if you're a resident of Pennsylvania, get out and vote Blue.  Wouldn't it be great to be known as the state that shut up the Idiot Jerk in the White House?