Finally, today is my 6th day.  Tuesday and Wednesday are my weekend off this week.  After that I get to work 4 days and have another weekend.  I have no problem with that.  Thanks to the generosity of the orange retailer I work for, and my age, I'm going to have around 40 extra hours of personal time I need to use by July.  In my mind, that spells another way to add to my vacation.

I watched a few episodes of The Haunting of Bly Manor.  It's actually listed as a 'Gothic Romance.'  Not my cup of tea.  Based on a short story / novella by Henry James, The Turn of the Screw, it is really nothing more than a number of backstory episodes of any almost entirely female cast.  If you're interested in a series about: women in danger, and women who make mistakes, or if you happen to be female, this might be for you.  The Haunting of Hell House was so much better. 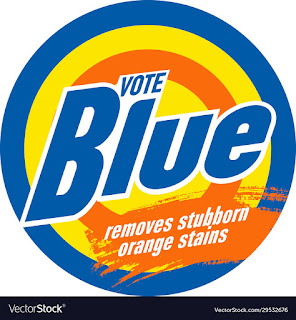 As of yesterday about 30 million ballots have been mailed in, mostly Democratic.  I saw where the Idiot Jerk in the White House is now encouraging mail-in voting in some states because... well, there's Covid.  Oh, and there's also the fact that he's doo dooing poorly.  That's not a typo, but rather a precise description of his campaign.  He's holding superspreader rallies all over the place, gathering his MAGA head base, infecting them so they can take the virus back to Mom and Dad, and Gramps and Gran. The schtick he pulled in 2016 isn't working.  His only agenda is to divide.  This is what you should expect from a man who dealt with 4 (6 actually) bankruptcies, a man who's $1 billion in debt to... who?  The Russkie?
We got 15 days until the election and the Republicans are scared shitless.  Perhaps if they had considered America as a whole, rather then only their selfish selves.  This has been their problem since Reagan.  I said it before and I'll say it again.  Reagan started the lie, the Idiot Jerk in the White house is going to end it... very, very badly.