For some reason or other, I keep thinking today is Friday.  I was corrected yesterday several times because I made several comments about today being Friday.  I woke this morning and had to remind myself today is only Thursday.  Mostly I think this is because I'm working 2 days and then off a day, working 2 days and then off a day.  Split days off, you know.  This is why I like my days off to be consecutive.

Here's an interesting bit:  before I hung the storm door, Big Seig would scratch the door to let me know he was ready to come back in, with the storm door in place, however, all he does is stand on the back steps and wait.

I did some designs on cellular shades for a very nice woman who had some very expensive rings on her fingers and wanted new shades for 12 windows.  The least expensive was for $122 per blind, the most expensive $535 per blind, and the middle blind cost $355.  She pointed to the one for $355 and told me she liked that style and said, "after all, it's nothing more than disposable income."  I don't know about you, but for me, almost $4000 is not 'disposable income.'

Oh, and there was a debate last evening. Against my better judgment, I started watching it, however I turned it off when Pence began speaking.  The moment he began shaking his head as Kamala was speaking, a visual way of tut, tut, tuting her like a pretentious authoritarian slovenly drunk on his own beliefs, I knew I was going to end up clicking away to something truer and wiser.  He is as unclean as his boss.  How do I know?   The fly.  Pictures and videos are everywhere.  What a striking image, a fly landing on the head of Pence as he was lying. 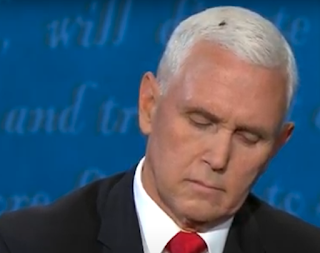 I have big dogs so I have seen the truth many times over.  Flies land on shit.  We all know this.  It's why we don't want them landing on our food.  We don't want them walking up and down are skin.  They eat and then they vomit, and then they eat the vomit.  Can you think of a more visual sign as to where this administration is headed?
Posted by Dave R at 6:36 AM