Oh my, Lily has a boo boo paw.  Nothing scary or frightening, mind you, just a little limp.  In fact, sometimes she forgets about it and jumps around as though there's nothing wrong.  I'm sure she'll be raring to go for our morning walk... outside... in the cold. It's 35 (F) here in Central Pa.  There's a chance of snow flurries on Monday.  And yes, that is my sole day off until next Sunday.

They NYT Cooking section had a recipe for 'old-fashioned beef stew.'  Yum.  Since I am off Monday, and it is supposed to be a bit blustery, I thought I'd cook up a pot.  I used to eat Dinty Moore until I realized there was so much sodium and fat in each can.  Maybe I'll bake a loaf of bread, too.  Now don't that sound tasty?  Freshly baked bread and beef stew on a cold, windy, pre-election day?

I saw where the Idiot Jerk in the White House has cancelled his plans for a large election night extravaganza at his International Hotel in Washington.  Invitations for the 'epic' event had been sent out.  Instead, he's going to be holding a smaller event, possibly at the White House, a place where social distancing is avoided to please the plague.  No actual explanation has been given.  Maybe he's expecting a boo boo moment.
And what about Texas?  The total number of people who have participated in early voting in the 2020 election has now exceeded those who went to the polls in 2016.  Republicans hate this shit.  They believe no one should vote until election day.  They want you to stand in lines and wait.  They want voting to be a difficult process because in their tiny little minds this is a demonstration of party loyalty, and no one is more loyal than a Republican.  In fact, the whole thought process behind voter intimidation is base on that single belief.  But then they've never been too smart, have they?
So, let's show them our inner Halloween and scare the shit out of them! 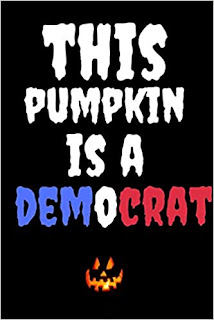