Ah, my weekend of indoor chores began... with a bit of a sleep-in, not much.  A dogwalker and her 3 dogs  marching up Cumberland Road roused my 2 as they demanded to be let out to bark their 'good mornings.'  We have a steady drizzle outside that I suspect will last most of the day since we have a 56% chance of rain.  Yippee.

I went up into the attic yesterday to bring down all the Christmas ornaments stored there.  Some are going to be thrown away, some given away.  I have about 15 strings of lights which are already sitting in the trash.  This seasonal tree is a good way for me to continue getting rid of stuff.  One thing waiting out on the porch waiting for garbage day (tomorrow) is a box with a nest of some sort attached to the side.  I have no idea what kind of nest.  One thing that comes to my mind is 'mud dauber' but I don't know if that's possible since it was up in my attic.  One thing I am certain of is that the little critters that hatched from it had stingers. 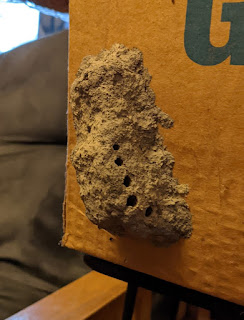 The Idiot Jerk was up spewing up in New Hampshire yesterday.  NBC said his speech was... meandering, if you want to call the drivel falling from his lips a speech.  The fact that his base loves to hear him whining and complaining about the injustices being done to him by the civilized world tell you a lot about their mental faculties.  I do not doubt for a second that they, themselves, do not share the same grievances.  He is high drama, they are low drama.  They are the gossip spreaders, and the back-biters who love telling you how much things would change if they were in charge.  They are mini-replicas of the Idiot Jerk. with their voices droning too loudly and their stingers always out.  The time has come to swat them away.