Holy Crap! Sunday snuck up on me... and turned into my Friday!  That's right! My weekend starts the minute I leave work this evening.  Now, ain't that just jolly!  Of course, after that I enter into scheduling hell where I work 5 days, have a day off, and then get to work another 5 days.  Son of a bitch!!

Our Halloween merchandise is on super duper clearance right now.  Even the ugly stuff is selling cause it's cheap. I am always amazed at how people will spend their hard earned dollars on something crappy simply because there's a yellow 'clearance' tag stuck on the box.  Sometimes life is not about buying 'clearance.'  There is a reason that tag is on merchandise... to clear inventory.  A day doesn't go by when someone doesn't come up to the flooring desk and ask "what's on sale."  One of these days I'm going to honestly say "the crappy shit."

And ain't this sweet? 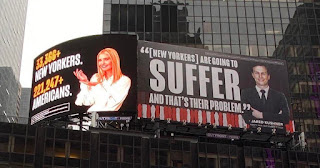 Jared and Ivanka Danka have threatened to sue.  Keep in mind that because they're considered advisors, both of them are being paid with your tax dollars.  I wonder how good Jared's Russian is since I can see a relocation to somewhere south of Moscow in the near future.
And there are now Covid diagnosis's in the Pence Party.  Fool. He no doubt thought he was in a restaurant and waved his flimsy, little hand in the air a few times saying "I'll have three infections over here."

This is all over the news, now:  The Idiot jerk was at a 'private donor' event down in Nashville and told those who had paid up to $250,000 to be in the same room as him that the Republicans were most likely going to lose their senate seats.  Imagine what those donors must have felt like, paying those kind of bucks to be told by the Idiot Jerk "yeah, we're probably going to lose the Senate."  I wonder how many of them asked for a refund.  I would have.  I mean... shit!  These are not the words they expected to hear from a tinfoil dictator.