So, this is my weekend!!  To celebrate, I went to the gym.  My arms are a bit rubbery.  Translation:  good upper body workout.  I had to play around with my Gym Genius workout App to figure out which buttons on my watch initiated which actions.  It actually works better than I was expecting.

I cut my thumb a work yesterday cutting a headrail for a vertical blind.  Had it been with a knife, I probably would have been written up since we're supposed to be wearing safety gloves.  However, it was the aluminum edge did the cutting as I toggled an aluminum peg into the cutter.  It didn't hurt much, but boy did it bleed.  Ouch. 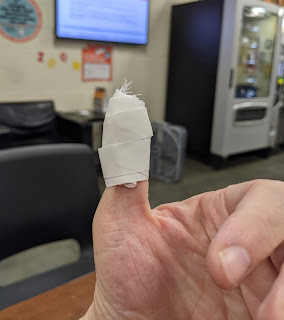 Yesterday the Supreme Court let sit a standing by the PA Supreme Court which gives the state the ability to count mail in ballots that up to three days after the election, they just need to be postmarked by November 3rd.  Personally, I don't think there are going to be that many, at least not enough to win the state.  I don't think that will happen.  Here's why: Pennsylvania Democrats have requested over 1,770,000 mail in ballots, while Republican's have only requests about 650,000.  Can we say ouch?

Also, I saw where that dumbshit Ted Cruz, and a few of his losing cronies, are planning to introduce legislation to amend the constitution to limit the number of Supreme Court justices to 9.  You can almost smell the stink of their desperation.  He represents the difference between and ouch and a whine.

And there was this interesting opinion in the Washington Post by Dana Milbank.  What happens to the Republicans if there is No October Surprise?  They and their Russian compadres have been trying to a fiction bomb yet everything they've tried to spring on the unwary public has amounted to nothing more than a dud.  The Idiot Jerk is preparing to lob the Burisma grenade during the debate this Thursday hoping America starts shrieking ouchy!  ouchy!  ouchy!  I do suspect, however, it's going to be the Republicans who end up crying out in pain.