The rain has almost stopped.  Looking at the map on Accuweather, it's going to continue tapering off.  The dogs may go for a walk.  Yesterday, during a pause, we did get a quick 'round the block' in.  I find it interesting that they don't like going out in the rain normally, but getting to take a walk?  That's a whole new story.
So, the elder MAGA head called and complained yesterday... not to me, to my supervisor, about his carpet installation.  He has 3 seams.  His basement isn't wide enough to use a 15 foot wide carpet.  For 45 minutes he whined and complained.  He did complain about the installers.  I was not privy to what he actually said about them, though evidently they ignored him when he tried to tell them how to do their job.  He is an old white man filled with anger and hatred who desperately wants to be an authority.
Okay, so is everybody as ready for this election to be over as I am?  Let's be honest here, this thing has been going on since 2015.  Yep, it never stopped.  The Idiot Jerk managed an Electoral College win and then never stopped campaigning.  He was always feeding his ego with his rallies.  When Covid arrived, he switched them off and turned on his daily TV shit shows.  I am so thankful I don't have cable.  That must have been a true nightmare.  And, as time went on, he continued to demonstrate more and more erratic behavior, saying things only a MAGA head could believe until that day he suggesting injecting Clorox.  Then it stopped, but only briefly.  Now, in a few days, his brain is going to implode.  Now, that might be entertaining.  Think of it as a deliciously political remake of Scanners. 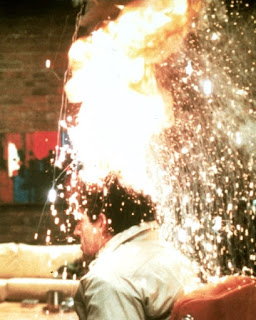 And, if that didn't whet your appetites, here is something truly remarkable, for those who haven't seen it.  Jon Ossoff scorched David Purdue at their last debate.  By last, I'm being serious.  Perdue cancelled their final debate because... well... just watch.
Posted by Dave R at 6:57 AM