There is that sinking feeling

Holy Crap!  I overslept!  By 15 minutes.  Now I've got to add a little pep to my morning routine.  I really do hate being pressed for time.

Yesterday was... well, your standard sort of day in the store.  I made some phone calls, dealt with some customers.  Two of the associates in my department are rabid supporters of the Idiot Jerk in the White House.  One of them reminded me yesterday that he had been behind in 2016.  Rather then point out the obvious, that 4 years had passed, that Hillary Clinton had been unpopular, that many voters felt certain she had the election in the bag, that there were so many radical difference between this year's election and that unfortunate stunner, I stayed silent.  I did say that the lying sack of shit in the White House was going to lose, of course, he didn't believe that.

There is this thread of commonality running through his base:  a lot of them are non-college educated white people, who not only believe Covid to be a hoax, but sincerely believe that on his inauguration day he will outlaw the wearing of masks.  That's right.  They will tell you that.  Masks are going to disappear.  And every negative thing you hear about the Idiot Jerk?  Well, in their minds that truly is fake news.  They really don't care about Democracy at all, just the fact that they're in charge and can tell you how you need to live your life.  Understanding there is no stopping the changes happening is completely beyond their comprehension.

One of the many new sources I read is Reuters, they give a European spin to what's happening in this country.  It's nice to know how we are being seen by the rest of the world.  Some of their journalists have been working the Falwell Jr scandal, digging up all sorts of shit. Jerry Jr, in his own snitty little way, warned them to stay away from his sons.   Evangelicals are... finding themselves caught in the cross-hairs here.  You see, it was Jerry Jr's super duper support endorsement of the Idiot Jerk which helped bring their votes to the Idiot Jerk.  Now, Jerry Jr's tainted, in a really bad way, especially since the Pool Boy joy was already beginning to cause problems in 2016.  That voting block is no longer a guaranteed whole.  They've fractured.

Anyway, now for a bit of foreshadowing.  There was boat parade yesterday for the Idiot Jerk yesterday down in Texas.  There were a lot of boats and some of them started sinking.  Some of them crashed into rocks.  Forbes has an interesting take on this.  Now, isn't that a nice comparison to sinking boats and sinking poll numbers.  Here's a visual. 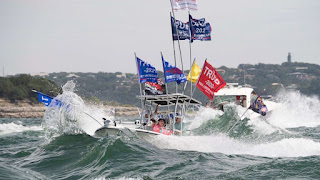