Crap, I got home yesterday prepared for a ride... and the bluetooth wasn't cooperating.  Since I tend to lack patience on certain things, I find issues like this time consuming.  In the end, it turned out to be a fixable problem with the radio transmitters of my Ant +, the dongle that connects to my Tacx.

It's Italian food day at work today.  Chicken Parmigiana, or Vegetarian Lasagna... and one other entre are on the menu.  I hope they have cannolis.  Tomorrow it's supposed to be Ice Cream day...  and I don't believe we're talking about simple cones or sandwiches here.  Can't wait to find out.

I realized this morning I'd forgotten to respond to your comments yesterday... the bike thing took almost an hour to resolve.  Damn!  And by then I had to move down to the kitchen to cook.  Using the rest of the taco beef and rice, I made stuffed peppers. 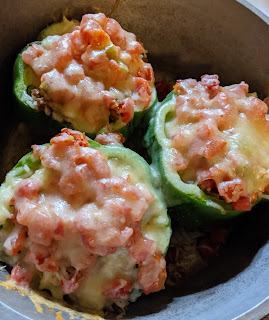 Two are in the freezer, one will be Monday's lunch.
And I see where the Idiot Jerk is going to nominate a Cracker Jack Crazy Christian to the Supreme Court. He's going to give his ultra-conservative base everything their dirty, little hearts crave.  I believe most of us knew this was going to happen.  This is part of his deal with the devil.  Power needs to be taken away from this minority group, other wise they will destroy the country, preferring some dystopian horror to democracy.  I think Joe Scarborough has a pretty good idea what's going to happen.  Every one of their evils will be undone.  For some of them, reality is going to be cruel.  They deserve it.  They are selfish, uncaring, and unsympathetic.  We are seeing the culmination of the Reagan lie, that the country is overwhelming conservative.  The time has come to end it and send their despot fleeing to Russia.  We need to teach them a terrible lesson.  Good.
This is amusing:  Lindsey Graham appeared on Fox pleading for Cash.  His campaign is in trouble.  Woe is me, Lindsey Belle.  This loser doesn't understand he's going to be sent packing back to Hell with his boss by the voters of South Carolina.  It's time to put the champagne on ice.
Finally, I saw where the Idiot Jerk's #2 spawn, Eric has said his father would accept a peaceful transition if the voters "blow him out of the water."  Eric... start packing now.