On a Scale of Evil

Monday.  My Friday.  After working 6 days in a row, I'm looking forward to tomorrow.  My list of chores is growing.  I'm already on my 2nd load of laundry.  I want to purchase my new storm door when I leave work today and tomorrow I may begin the installation process.

The one remaining 16 cent goldfish looks a bit odd.  His dorsal fin is down, not a good sign.  If he take the southern current, I'm thinking of replacing him with a Beta.  They're solitary, not at all social.  They like to pick fights.  They are both pretty... and pretty aggressive.  That teeny tank is small, so it would only be him.  Hhhm, something to think about.

This year the Tour was won by Primoz Roglic, a Slovenian who started off as a ski jumper.  Go figure.  Here's a nice snap as they head up the Champs Elysees. 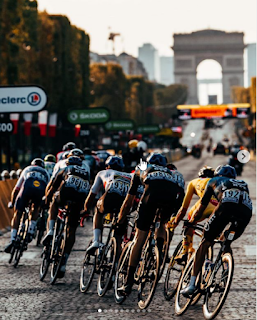 For those who don't know, the Democrats crushed fund raising records in the 28 hours after the death of RBG, 91 million.  And don't forget, the Idiot Jerk is running out of money.  I believe his war chest is down to around 300 million while Joe's is approaching 500 million.  Ouch!
And while Evangelicals are dancing with delight because he might nominate a Cracker Jack Crazy Christian, they are forgetting the one thing most important in his mind.  Getting re-elected.  Since they've already sold him their souls, their votes are a sure thing.  They're not even going to care if he betrays them.  It's the Latinos from Florida he desperately wants to rope in... which is why Barbara Lagoa seems to be in the ascendency.  While she is Cracker Jack Crazy, her heart isn't as full of religious hatred as some of the other women he's considering, she seems to hate on other levels.  On a scale of evil, with 10 being the worst and 1 being the best, Lagoa is about 7.5.
A majority of Americans say filling the vacancy at the Supreme Court should be done after the election, since when does that minority group, the Republicans, care about what the majority think, or say.  Remember, their credo is "Shut Up!  We're in Charge."  Well, that's going to change.